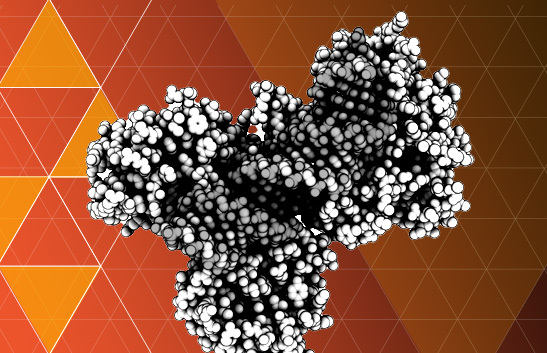 In this series, our team of biologists and scientific advisors break down the latest research and trends in innate immune system science from leading publications and institutions.

Introduction: MDA5 is a cytoplasmic RNA sensor involved in the recognition of viral and endogenous double-stranded RNA (dsRNA). In humans, rare gain-of-function alleles of MDA5 cause interferonopathies, including Aicardi Goutiere’s Syndrome (AGS), monogenic forms of lupus and Singleton Merten Syndrome (SMS). Moreover, there is strong genetic evidence that a common risk allele presents in roughly half the human population significantly increases the relative risk for several common autoimmune diseases, including systemic lupus erythematosus, rheumatoid arthritis, psoriasis, vitiligo and type 1 diabetes. Interestingly, loss-of-function MDA5 alleles are present in about 12% of the population, and these alleles reduce the risk of these same common autoimmune diseases without causing an increased risk of infection in adults. Together, these human genetic data provide a compelling rationale for the potential therapeutic utility of MDA5 antagonists.

Most pattern recognition receptors (PRRs) of the innate immune system detect the presence of clearly defined molecular structures, often features of pathogens or molecular patterns associated with danger or damage signals. In contrast, activation of MDA5 by dsRNA is considerably more complex than a simple receptor-ligand interaction, as it requires overcoming multiple thresholds (likely in place to prevent inappropriate activation or in appropriate recognition of self RNA), such as gauging dsRNA length, quantity and quality. This only becomes possible through an incompletely understood cooperative interplay between many copies of MDA5 protein, as well as by engaging several accessory proteins that regulate post-translational modifications of MDA5. This multi-step process allows the filaments of MDA5 that form along dsRNA to function as a molecular ruler or gauge to distinguish viral dsRNA ligands from normal endogenous host RNA structures.

Below, we discuss three recent publications that illuminate key steps in the activation mechanism of MDA5, either by defining the function of proteins that act as accessories to MDA5 activation or by uncovering the mechanistic impact of disease-causing point mutations in MDA5. Some of the mechanistic concepts of MDA5 activation proposed in the studies below appear mutually exclusive, and therefore, future studies are required to gain a complete grasp of the multifaceted processes and contexts that govern MDA5 signalling activity in health and autoimmune disease.

Summary: Most pathogenic gain-of-function (GoF) mutants of MDA5 map either to the dsRNA binding interface or to the ATP binding pocket. A manuscript deposited on BioRXiv by senior author Yorgo Modis illuminates the functional impact of the M854K mutant of MDA5—which, while located distant from both the ATPase and the dsRNA binding domains, still leads to a defective ATPase and a loss of dsRNA ligand selectivity. Also like other MDA5 GoF mutants, M854K produces inflammatory encephalopathy in carriers reminiscent of AGS and SMS. MDA5 M854K shows constitutive activity in the absence of exogenous dsRNA because it exhibits increased binding affinity to endogenous RNA forms. Specifically, this mutant fails to relax its grip on dsRNA at the step of ADP release in the ATP hydrolysis cycle due to an inability of the mutated MDA5 to undergo conformational changes. This inability to complete the ATPase cycle results in erroneous activation even when binding to suboptimal endogenous RNA ligands.

So What: Comparing ATPase-driven WT MDA5 filament dynamics on dsRNA to the pathogenic M854K mutation, Modis and colleagues propose that the MDA5 ATP hydrolysis cycle normally functions as a proofreading mechanism probing the quality of the interaction with the bound dsRNA. In this way, loosely bound endogenous RNA promotes non-productive dissociation of MDA5 from the filament, while viral dsRNA can sustain MDA5 engagement long enough to allow for signalling pathway activation.

Summary: MDA5 function is modulated by several accessory proteins; however, in many cases, their mode of action is still poorly understood. A recent publication by Takeshi Fujita and colleagues in collaboration with IFM scientific advisor Hiroki Kato aimed to clarify the role of the MDA5 accessory protein LGP2. LGP2 is the third member of the RLR family that includes MDA5 itself and RIG-I, and it contains similar helicase domains but lacks the CARD domains that mediate signalling by the other RLR family members. This work shows that co-expression of LGP2 in HEK293 cells enhances MDA5 signalling. In biochemical experiments, the presence of LGP2 is revealed to greatly accelerate MDA5 filament formation along dsRNA.

Measurements of filament thickness suggests that labelled LGP2 is co-incorporated at intervals with MDA5. However, counterintuitively, instead of stabilizing the MDA5 filament, LGP2 is shown to increase ATPase-driven filament dynamics, amplifying both ATP hydrolysis and dissociation of monomeric MDA5 from the filament. Using sensitivity to protease digestion as a measure of CARD-domain exposure required for MDA5 signaling to MAVS, they observe that the presence of LGP2 increased CARD1 domain protease sensitivity during the ATPase cycle within the filament and also in monomeric MDA5 following the ATP hydrolysis driven-release from the filament.

So what: Besides providing a compelling mechanism of how LGP2—itself devoid of CARD signalling domains—acts to enhance MDA5 signalling, the authors of this study propose the provocative hypothesis that MDA5 may also maintain signalling competency in its monomeric form after cycling through, and dissociating from, the dsRNA filament in the presence of LGP2. While the mechanism or hallmarks of conformational changes that distinguish a quiescent MDA5 apoprotein monomer from a monomer released from the filament in signalling-enabled form remain unclear, the finding could explain how some rare pathogenic MDA5 gain-of-function mutants can be active in driving downstream signalling without binding to dsRNA or requiring ATPase function.

Read more in: Viral RNA recognition by LGP2 and MDA5, and activation of signaling through step-by-step conformational changes

Summary: Ubiquitin E3 ligases play multiple roles in governing cellular protein functions. In many cases, E3 ligase-mediated ubiquitination has a homeostatic role, tagging the protein for rapid degradation. For MDA5, however, previous publications have shown a distinct accessory function of E3 ligases, where polyubiquitin promotes the activation of MDA5 signalling via its CARD domains. In a manuscript recently published in Molecular Cell, IFM scientific advisor Sun Hur and colleagues establish TRIM65 as an MDA5-specific E3 ligase by identifying the site and molecular interactions between the two proteins. Combining data from X-ray crystallography and cryo-EM structures, these authors show that the PSpry domain of TRIM65 selectively binds two α-helices in the Hel2 domain of MDA5. The relatively low affinity of this interaction is only overcome when TRIM65 bivalency and MDA5 multimerization cooperate to enhance avidity. Interestingly, Hur and colleagues show that the binding principles they uncovered are conserved by defining selective pairs of defined TRIM family E3 ligases for RLR family members RIG-I and Lgp2 and the evolutionarily more distant helicases Dicer and DDX41.

So What: The complex dynamics of MDA5 filamentation along dsRNA is just one key aspect in the multi-step process that ensures the fidelity of MDA5 activation in response to cognate ligands. In this study, the authors show that dsRNA-dependent MDA5 multimerization also functions as the precondition for TRIM65 E3 ligase interaction. Because the affinity between monomeric forms of either of the proteins is low, bivalent dimers of TRIM65 are required to bind the Hel2 domains of MDA5 molecules when pre-aligned via filamentation. Together, this allows for precise control of MDA5 ubiquitination and activation by requiring both dsRNA-dependent multimerization of MDA5 and dimerization of TRIM65.

Stay tuned for additional studies and perspectives shared by the IFM R&D Team!