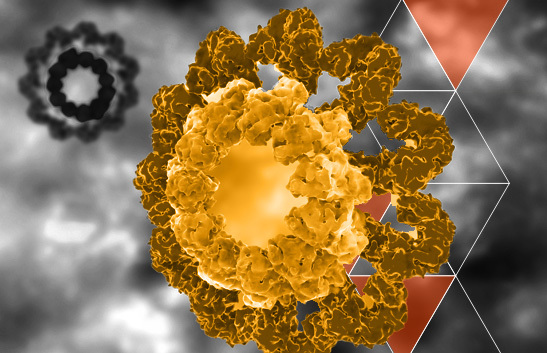 Introduction: NLRP1 was the first NOD-like receptor (NLR) described to form an inflammasome, which leads to the secretion of the inflammatory cytokines interleukin-1β and interleukin-18. In humans, rare NLRP1 gain-of-function mutations cause a spectrum of severe inflammatory skin disorders, and genome-wide association studies implicate more common NLRP1 sequence variants as risk factors in a wide range of autoimmune and autoinflammatory diseases. These data and others suggest that inhibiting NLRP1 may provide a treatment for both rare and common autoimmune and auto-inflammatory disorders. However, our knowledge of precisely how human NLRP1 is activated and what triggers activation is incomplete, hampering the search for potential inhibitors.

NLRP1 is unique among the NLRs in that it undergoes autoproteolysis in a domain aptly named “Function to Find” (FIIND). Autoproteolysis results in the production two non-covalently associated fragments, an autoinhibitory N-terminal fragment implicated in NLRP1 regulation and pathogen sensing and a C-terminal fragment that when released leads to inflammasome formation. Autoproteolysis is absolutely required for NLRP1 activation, mutations that block autoproteolysis prevent NLRP1 activation while mutations that enhance autoproteolysis increase activation. The NLRP1-FIIND domain also mediates the interaction of NLRP1 with dipeptidyl peptidases 8/9 (DPP8/9) and small-molecule DPP8/9 inhibitors activate NLRP1 inflammasome formation by mechanisms that are not completely understood.

Two recent sets of publications provide a flurry of important new insights into the interaction of NLRP1 with binding partner DPP9 and identify viral pathogens that activate human NLRP1.  These new data implicate human NLRP1 in viral immunity and suggest a potential role for NLRP1 in mediating viral-triggered exacerbation of lung diseases, including asthma and COPD.

Summary: Two papers, published in bioRxiv, shed light on the role of DPP9 in NLRP1 activation by resolving cryo-EM structures of the NLRP1-DPP9 complex. Unexpectedly, both groups show that two NLRP1 molecules in distinct conformations bind one DPP9 molecule in a ternary complex. The first NLRP1 molecule, in a full-length auto-inhibited conformation, binds DPP9 via a unique binding site on DPP9. This allows a second NLRP1 molecule, in an active auto-proteolytically cleaved form, to bind via an interaction with the first NLRP1 and a second distinct binding site on DPP9. One of the research groups, led by Jijie Chai, also presents a crystal structure of the rat NLRP1-FIIND domain, providing the first high-resolution structure of this functionally important NLRP1 domain.

So What: The two studies broadly agree on a mechanism whereby DPP9, together with a full-length NLRP1 molecule, acts as a checkpoint on NLRP1 inflammasome activation by directly binding and sequestering the pro-inflammatory NLRP1 C-terminal fragment. Intriguingly, this paradigm resembles the ‘guard model’ of plant NLR function where NLR ‘guards’ sense and respond perturbations in ‘guardee’ proteins. According to this model, NLRP1 may function to guard DPP9 such that any perturbation of DPP8/9 activity or disruption of NLRP1-DPP9 binding results in NLRP1 activation. While many questions remain, these studies provide important insights into the regulatory significance of the NLRP1 FIIND domain and its interaction with DPP9.

Two Studies Identify NLRP1 as a Target for Cleavage and Activation by Picornavirus 3C Proteases, Suggesting a Therapeutic Role for NLRP1 in Inflammatory Airway Diseases such as Asthma

Summary: Although cleavage by pathogen proteases, such as Bacillus anthracis Lethal Toxin, have been shown to result in degradation of the N-terminus and subsequent activation of NLRP1B in mice, analogous mechanisms had not previously been described for human NLRP1. However, two recent papers published in Science and bioRxiv show that human NLRP1 senses and is activated by 3C proteases from picornaviruses, a diverse family of enteric and respiratory pathogens that includes coxsackieviruses, polioviruses and rhinoviruses. These studies represent the first direct demonstration of human NLRP1 activation by pathogen-associated factors.

Previous studies had demonstrated that infection of primary human bronchial epithelial cells with picornaviruses such as human rhinovirus (HRV) induced caspase-1 activation and IL-1 secretion, although the upstream viral sensing mechanism had not been identified. The current papers show that either transfection of cells with 3C proteases, or infection with picornaviruses, results in cleavage of NLRP1 at a site within the N-terminal linker region. Cleavage at this site leads to hallmarks of NLRP1 activation including ASC oligomerization, pyroptotic cell death and IL-1 secretion. Critically, NLRP1 appears to be the predominant endogenous inflammasome sensor in human airway epithelium, and its genetic deletion abrogates IL-18 secretion from rhinovirus (HRV)-infected primary human bronchial epithelial cells.

So What: In addition to providing insight into the regulatory role of the NLRP1 N-terminus, these papers highlight the evolutionary struggle between viral pathogens and host defense mechanisms. Picornaviruses all translate their genome as a single polyprotein, which is then cleaved into mature proteins by 3C protease at multiple sequence-specific sites. Thus, the fact that the N-terminal linker region of NLRP1 has evolved to mimic 3C protease cleavage sites allows NLRP1 to sense and respond to these essential picornavirus virulence factors.

Importantly, these results identify a new function for the NLRP1 inflammasome in human antiviral immunity and airway inflammation. Since viral infection is known to exacerbate chronic inflammatory lung diseases, including chronic obstructive pulmonary disease (COPD) and asthma, these results suggest that the human NLRP1 inflammasome may be a therapeutic target to treat these common and debilitating conditions.

A Study Identifies Human NLRP1 as a Sensor for dsRNA, Suggesting Another Mechanism by which Human NLRP1 Serves as a Viral Sensor

Summary: A research group led by Veit Hornung at the University of Munich have shown that human NLRP1 is activated by Semliki Forest Virus (SFV), a single positive-stranded RNA virus of the alphavirus family. Infection of primary human keratinocytes with SFV induced NLRP1-dependent release of Il-1, accompanied by ASC specking and other classical hallmarks of pyroptosis. The authors elegantly demonstrate that this NLRP1-mediated pathway is independent from other nucleotide sensing pathways that mediate interferon responses to viral infection and that mouse NLRP1B, one of three mouse NLRP1 paralogs, does not respond to dsRNA.

The mechanism involved is different than the protease-mediated process described in the previous papers, involving direct binding of dsRNA generated during viral replication of infected cells to the leucine-rich repeat (LRR) domain of NLRP1. Binding of dsRNA or synthetic polymers such as poly(I:C) to the LRR of NLRP1 results in activation of the ATPase activity of the adjacent NACHT domain, likely reflecting a conformational shift of the protein from an autoinhibited closed conformation to an active open conformation. This is significant, since previous studies have indicated that nucleotide binding and hydrolysis by the NLRP1 NACHT domain is not required for NLRP1 activation by other stimuli, such as DPP8/9 inhibitors.

So What: In addition to reinforcing the importance of NLRP1 in sensing viral infection of barrier tissues, this study establishes human NLRP1 as a bona-fide pattern recognition receptor that directly binds to dsRNA. It also indicates that, rather than simply functioning as bait for proteases, the N-terminus of NLRP1 is a sensor that triggers a conformational shift analogous to the process by which other NLR family members are activated. The challenge will be to understand how these mechanisms operate in conjunction with release of the C-terminal UPA-CARD fragment and what opportunities for identification of small molecule NLRP1 antagonists these new discoveries offer.

Read more in: Human NLRP1 is a sensor for double-stranded RNA